What follows is some free information about how to identify fake slot machines that are commonly advertised as RARE and/or authentic.

If you want more information go to http://www.CoinOpCollectorForum.com

First of all, the following models of slot machines have been reproduced.

There are a few other models but they do not show up that often so I am not going to mention them here.

Watling Treasury's and Rol-A-Top are very valuable machines. Legitimate models of each should easily sell for over $3,000. In fact some Rol-A-Tops are valued at over $10,000. I am not going to spend time talking about them here. If you want information about how to identify these machines, post a message in the forum.

Most Mills Golden Nuggets being sold are reproduction or what are called revamp machines. Revamps take an original machine (typically a Mills Black Cherry) and change out parts to make it a Golden Nugget. These new parts are the naked ladies, the nuggets, the award card, and the reel strips. If you are considering purchasing a Golden Nugget scroll down a bit for detailed information on original and fake Golden Nuggets.

Here us a U-Tube video which discusses how to identify a reproduction War Eagle.

Here are photos of what some legitimate antique machines (some have been restored) look like: 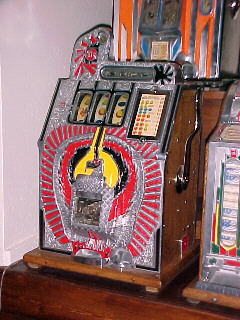 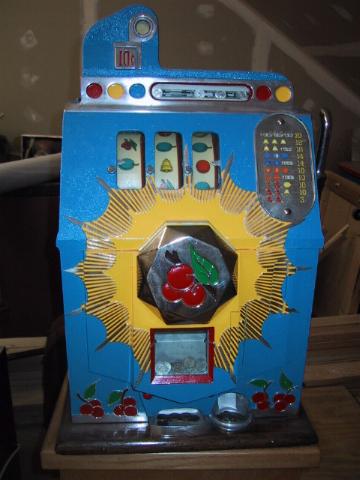 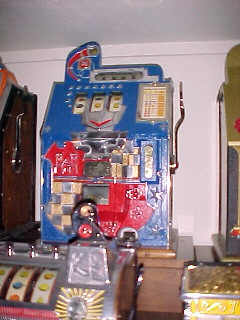 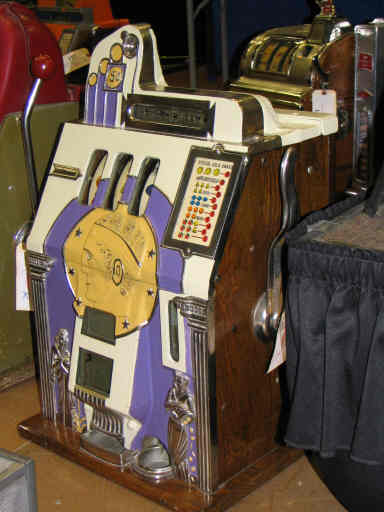 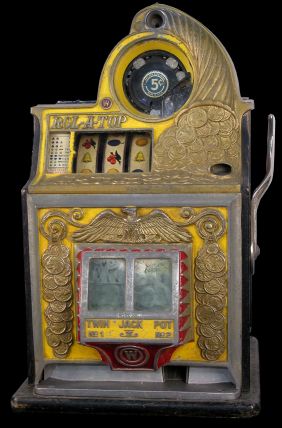 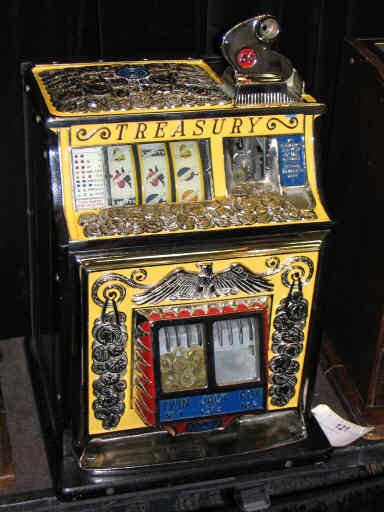 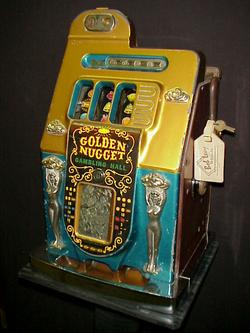 The above photos are used with the permission of the owner of them.

What I am going to concentrate on is the Mills reproductions.

Probably the easiest and most reliable way to identify the machine is to simply look at it. Take a look at the castings, the wood base & sides, and the mechanism. If they all look brand new then they probably are. Look at where the door fits into the wood base. Does it have nice sharp edges? If so, then it is probably new. Look at the mechanism, is it super clean? If so, then it is probably brand new. NOTE: Some people when they restore a machine will completely tear the mechanism down, bead blast it, wire wheel it, and then cover it in a clear coat. These mechanisms will also look brand new. However, very few people go to such lengths when they restore a machine because it is not cost effective. Most people concentrate on the outside of the machine when they restore it. They will only bead blast the mechanism if it is rusty. In any case, the cabinet, even if it has been restored, should show signs of its age. All of these machines are well over 50 years old they there should be signs of that somewhere on the machine. I have heard that some of the clowns out there selling the knock offs tell the people that the machines look brand new because they instruct their restorer to tear the machine down, bead blast it and all that. All I can say is that if the statement is true then they must be paying their restorers about $.25 per hour because restoring the machines in such a manner is VERY labor intensive and there is no way they could be making money on it if they are selling the machine for under $3,000. If the machine looks brand new, be very suspicious and use the rest of the information in this article to help you decide what you are thinking about buying.

Except for the Golden Nugget, all of these machines, if original, were made in the 1930's. If they are original they should have a serial number stamped in the top casting. It is usually stamped just to the right of the award card or on the far right at the top of the front casting. These machines have been reproduced in quantity since the 1970s and are still being made today. Original Golden Nuggets do not have the serial numbers stampped in the casting but should have a sticker on the inside of the case showing the serial number.

However, to my knowledge, the reproductions do NOT have serial numbers stamped in the castings. If you are thinking about buying one of these Mills machines ask the seller for the serial number. This is probably the easiest way to determine if the machine is legitimate or not.

The following two photos show where the serial number is typically stamped in Mills machines: 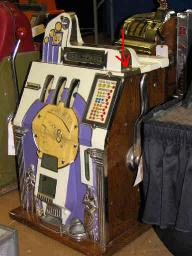 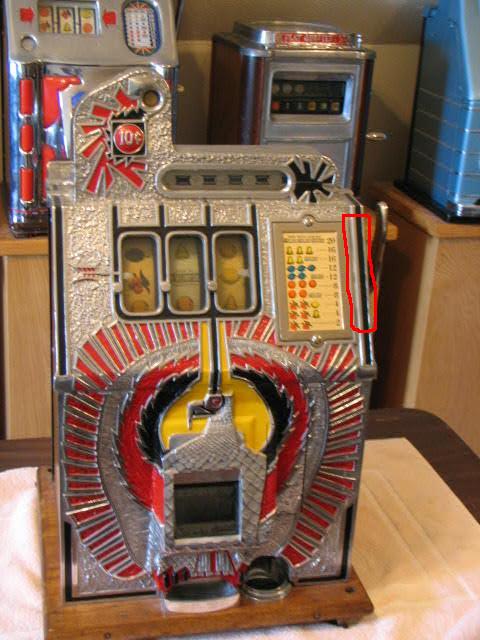 Another thing you should be aware of is that the vast majority of reproduction Mills machines are quarter denomination (however, I have seen reproductions in nickel, penny, and dime). In reality, very few of these machines that were made in the 30's were quarter machines. Most of them were nickel.

Another thing to look for is two horizontal bars (levers) on the escalator. All original machines have two. The vast majority of reproductions only have one. The reason they only have one is because the other bar is used for what is called check detection and is not necessary for the machine to work on coins. Therefore, the people generating the fakes did not spend the money and effort to put them in the escalator.

The base of an orignal Mills machine from the 30s should have two nails in it. These nails were used for holding the base together. Many, but not all, reproduction Mills machines do not have these nails. You should know that sometimes the wood base has to be replaced while restoring an original machine because the base may have severe water damage. You should also know that sometimes the people who are generating the knockoffs put small tacks in the base to make it look like the nails.

Some people will say the machine has to be original because it has a red Mills sticker on the side of the machine. You can get these stickers for $1.50 and they are used when people restore a machine. When it comes to proving that a machine is not fake they mean nothing.

Another thing people who are making the fakes do is place a sticker on the inside of the machine stating that this machine was built using old/new parts or using as many original parts as possible. If the machine has a sticker that say something like this then run away from it as fast as you can.

Also, look at the slides. If they are plastic (originals are brass) then get away from the machine. Most of the people making the fakes use metal slides, just like the originals. The really bad knock-offs use plastic slides.

Finally, the thing to look at is the handle. Take a look at the machines at the beginning of this article. They all have the correct handle. Most reproduction Mills do not have this style of handle.

If you are thinking about buying a machine and are still unsure go to http://www.CoinOpCollectorForum.com Once you are there you can ask collectors & dealers about the machine. If you are worried that you might be tipping them off to a machine then don't be. Odds are they already know about it since a lot of these guys watch eBay on a daily basis. In addition, the Mills machines that are being reproduced are not really being sought out by collectors. Most, if not all, collectors already have them (originals, not the knock offs) in their collection because these machines in reality are not that rare. The only exception to this would be an original Golden Nuggets. True original Golden Nuggets are very hard to find. There are droves of fake Golden Nuggets out there.

Finally, lets compare an orignal War Eagle and a reproduction War Eagle side by side: 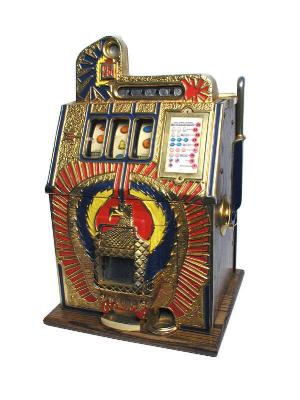 The machine on the right is a quarter machine (few legit War Eagles are quarters), it pays on a single cherry, has no serial number (although you cannot tell in the photo), there are no nail holes in the base and has an incorrect handle.

OK, so now let's take a look at the Golden Nugget machines in detail.

The VAST majority of the Golden Nuggets listed on eBay are fake, phony, reproduction, remanufactured machines. Very few original Golden Nuggets exist. However, thousands of reproductions are out there. Many of these machines were sold under the false pretense of being original. Fortunately, it is pretty easy to tell an orignal from a fake.

Here are some pictures comparing an original and reproduction. The original is on the left. 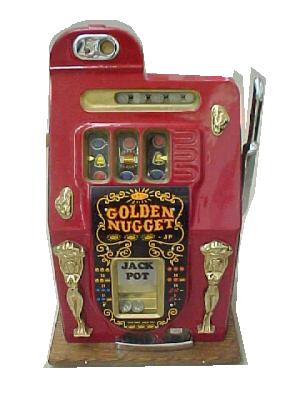 Although you cannot tell from the picutre. The orignal award card is STAMPED. The fake is just silk screened. 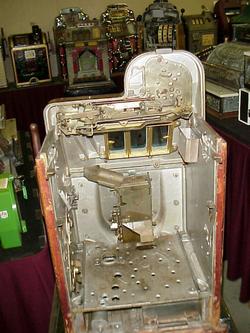 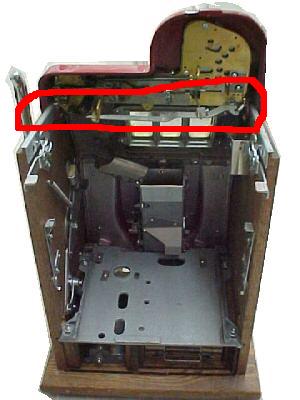 Notice that the original has two horizontal bars on the escalator and the fake only has 1. Also notice the difference in the base plates. In addition, the original has steel plates screwed into the side. 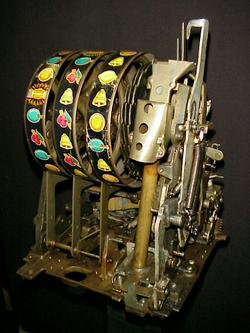 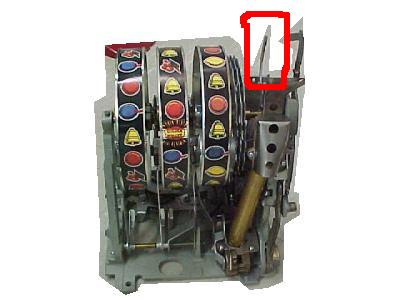 Notice that fake only has 1 veritcal lever and the original has two. 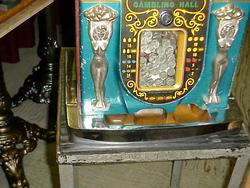 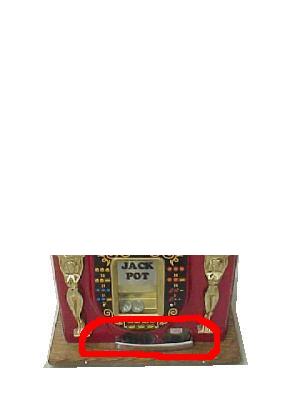 The original coin tray is much wider and the chrome piece wraps all the way around the front of the machine. 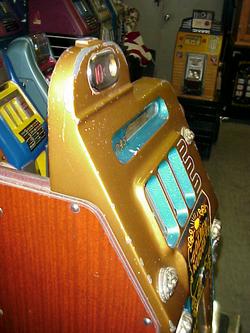 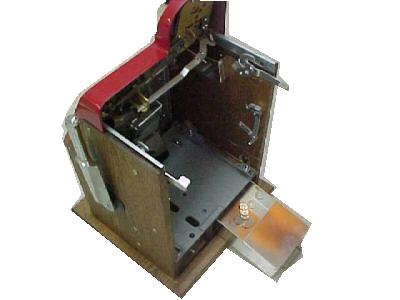 The original has formica sides. The reproduction has solid wood. This is also a good shot of the fake showing only a single horizontal lever on the escalator. 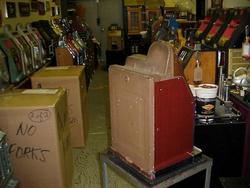 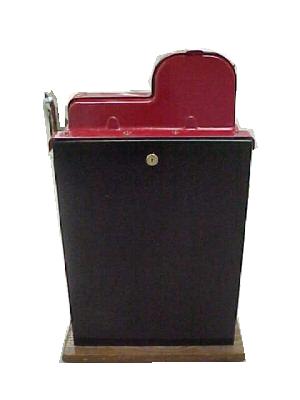 Compare the back doors. The fake is shiney and smooth, the original is not.

I would like to thank Bob Levy (www.AntiqueSlotMachines.com) for providing the photos for the original Golden Nugget. If you want an original Golden Nugget machine I strongly urge you to contact a reputable dealer like Bob. If you don't mind owning a reproduction please realize that it has zero value as an antique and please don't pay too much. In addition, if you ever decide to sell it please have the integrity to let the new owner know what he/she is buying. You should realize that it is against eBay rules to sell reproduction machines. If eBay ever decides to enforce their own rules you may be stuck with a machine that you cannot sell.

This came from my grandpa/father/mother/sister/brother who died last month. He/she paid $4,000 for it. (Unfortunately, this statement might be true because some places do sell the fakes for rediculous amounts of money).
This is a friends machine and I don't know anything about it.
This is a SUPER RARE machine.
The coins move across the top so it has to be an original.

Also, beware of the strip mall stores that sell stuff on eBay. I have seen reproduction machines being sold in them and the stores when notified do nothing about it. In addition, if buying from a store look at their return policy. If they have a restocking fee then I wouldn't do business with them. They put these high restocking fees (hundreds of dollars) to discourage people returning the fakes. If they are selling legitimate machines then people would not be returning them and they wouldn't need to have such policies in place.

An authentic slot machine is a substantial investment (well over $1,000) to most people. They are great conversation pieces as well as a great part of our history. Do your homework and don't get burned.

I hope this information has been useful to you.